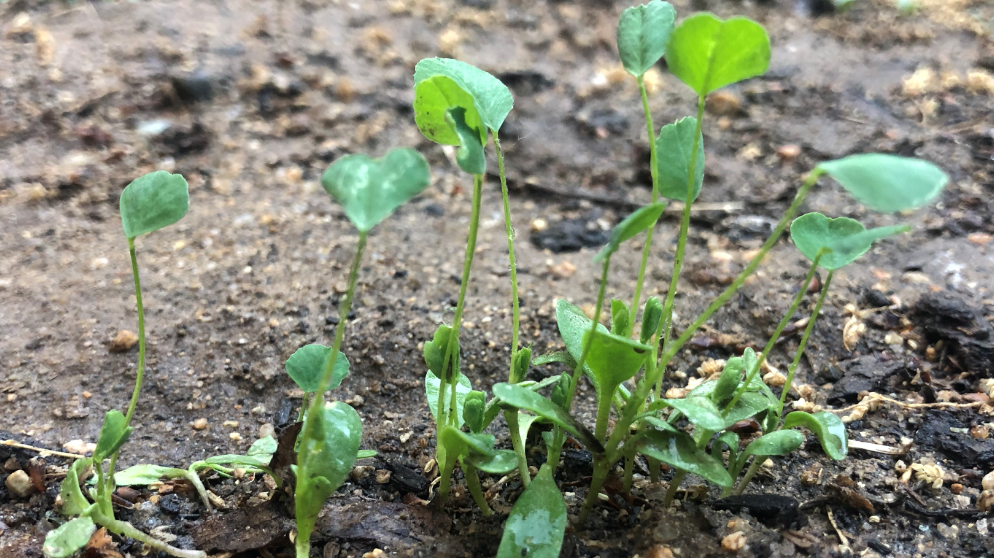 Posted at 22:00h in Agronomy by John Manago
0 Likes

New spring seedings of Alfalfa Partners® fall-dormant alfalfa varieties are off to a great start in much of the northern two thirds of the United States.
Alfalfa seed can sprout in moist soil at temperatures of 35 degrees F and above. Seedlings are generally more cold tolerant than new spring growth from established plants, partly because the thick cotyledonary leaves are so close to the soil surface where nighttime temperature can stay warmer than air temperature even a few inches higher.
Important scouting tips for new alfalfa seedings, from emergence through the first three weeks of plant growth :
1. Look for good emergence. Seedlings should begin emergence within 7-10 days when soil temperature is averaging 50 F. Emergence occurs more quickly with higher soil temps. When soil temp is 70 F or above, such as may occur in coming weeks, you can see good vigorous alfalfa seed emergence in as little as five days.
2. Check for seedling health. Seedlings should have firm white to green tissue, not brownish discolored or water-soaked depressions in the hypocotyl or cotyledons. While not typical when planting fungicide treated seed, pythium and damping off of seedlings can occur when soils are water-logged, or during extended cool periods of cloudy wet conditions.
3. Count emerged seedlings for an early view of stand establishment. Forty to fifty healthy emerged seedlings per square foot is a good goal in seedling alfalfa. In 7-inch drilled rows, count emerged seedlings in a 21 inch length of row to get an approximation of emerged seedlings per square foot. In ten inch drilled rows, a 14 ½ inch length of row approximates one square foot. Make your stand counts in several places within fields to get an understanding of uniformity. Twenty to thirty healthy emerged plants per square foot can be acceptable but will likely result in slower yield progression during the establishment year. Young plants only have one stem, and full yield requires at least 55 stems per square foot. As plants mature and develop crowns during the first season of growth, each plant crown can create multiple crown buds that result in multiple stems per plant following each cutting. This enlargement of plant crowns during the establishment year leads to competition and plant attrition, bringing the plants per square foot down to 20-25 plants at the end of the first year in a new stand of alfalfa.
4. Scout for weeds. Check to see that pre-plant herbicides are controlling target weeds as expected. If soil conditions turn dry, it may reduce pre-plant herbicide effectiveness. If weeds are emerging along with your alfalfa seedlings, consider an early post-emergence herbicide. Post-emerge herbicides for alfalfa are most effective when weeds are small. Broadleaf weeds are best controlled while still in the seedling or rosette stage. Butyrac®200 and Buctril® can provide a broad range of post-emerge broadleaf control. Poast® and SelectMax® can be very effective choices for early grass control. Consider Raptor®, Pursuit® or Prowl®H2O when both grass and broadleaf control is desired along with residual control, when alfalfa reaches the second trifoliate leaf stage. (Read and follow current label directions when using any herbicide or pesticide).
5. Scout for insect pests, especially in no-till and minimum-tillage alfalfa establishment where prior crop residue may harbor overwintering pests. Aphids and cutworms can be particularly harmful to seedling alfalfa. Armyworms can be attracted to fields with small grain nurse crops. Alfalfa weevils are less likely in new seedings because adults typically overwinter in established alfalfa fields. As the season progresses, potato leafhoppers can be a problem in the Midwest and northeast, but not likely during the seedling phase of spring seeded fields because leafhoppers do not overwinter in areas where fall-dormant alfalfa is grown. Instead they are brought north on late spring and summer storm fronts. It’s a good idea to begin scouting for leafhoppers soon after summer storm fronts coming up out of the Gulf states—but that’s a topic for next month ! 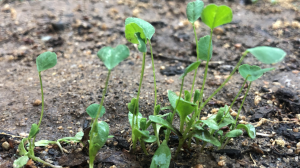 HOTO: SW5213 — This group of alfalfa seedlings ten days post-emergence shows cotyledonary leaves close to the soil surface, with the first unifoliate leaf fully emerged. Small trifoliate leaves are beginning to grow just above the cotyledenary leaves. These seedlings are well on their way to good stand establishment. Healthy emerged plants at this stage will become fully established over the next 6-8 weeks. Learn about SW5213 — (SW5213)